Washington, D.C. 20510
Gentlemen,
First, please allow me to congratulate all of you and your staff members on your tremendous success and the welcomed triumph of our party in the recent congressional midterm elections.  My trust and faith in government and the election process has been restored.  However, certain aspects of the GOP culture of corruption survived the election and must be expeditiously exposed and removed from political power, if we, as a nation are to restore our once-enviable and prestigious position in the global political/economic arena.  With a Democratic-controlled Congress, I am highly confident that you will be the leaders that forge the way in this direction.
On a much more personal note, my parents and the Catholic nuns and priests who taught me tried to instill in me a deep sense of honesty, fairness, and compassion for my fellow human beings on this planet. In this regard, I believe they were somewhat successful, as my embracement of these virtues has placed me in my current legal/political dilemma.  Unfortunately, my schooling in Civics 101 did not include such issues as PAC money, extortion, bribes, deceit, illegal collusion, and mob assassination contracts, all of which we have sadly observed within the GOP culture-of-corruption the past several years.
I have included a copy of a letter that I recently sent to Congressman Henry Waxman.  For Senator Durbin and Senator Obama, since criminal allegations made within this correspondence implicate the Seventh Circuit Court system and also one of the largest employers in your state, United Airlines, I felt both compelled and obliged to at least provide you with a courtesy “heads up” on these serious legal matters.
I personally am not an idealist; I recognize our current legal and political system are both far from being perfect, but I also know that I should not have had to put my family or myself through what has tragically transpired the past few years since 9/11.  Nor should a respectable Chicago businessman, Mr. Michael Lynch, be forced to have 24-hour/day armed bodyguards to protect his family and himself while holed up in his Lake Forest, Illinois home because there is a mob contract out on him. His family has received death threats as well.  And why?  All because he has been honestly and actively attempting to help restore some semblance of “Civics 101” in this country by exposing illegal governmental collusion, extortion, bribery and a potentially corrupt judiciary.  Somewhere along the line our entire system has been derailed and collectively, we are ALL to blame for passively allowing our system of checks and balances to degenerate to this pathetic level.
Additionally, I have included a joint letter that I had mailed to the Departments of Justice, Homeland Security, and Transportation in April 2006.  There was no meaningful action on their part.  There have been many agencies and news outlets the past several years that have ignored my plea to hear the cry of airline employees and other industry workers with regard to meaningful pension legislation and other issues.  Our petitions have gone unheeded…till now.
A few nights ago, Mr. Lynch and myself had the good fortune of an interested and sympathetic ear at CBS News.  We have both told our stories and presented meaningful legal evidence to substantiate our claims.  We are both very optimistic with regard to federal grand jury potentiality in this matter.  We want the truth told and justice served in an honest system of government. Additionally, tens-of-thousands of airline industry and other workers have circulated nationwide the letters that had been previously sent to both the cabinet members and Congressman Waxman.  Our army of concerned workers and retirees is growing by the hour as is evidenced by email responses we are receiving from every corner of the country and even distant countries abroad.  Our collective voice will be heard; our story will be told; the truth will be exposed; justice will be served.  We need your help in this matter.
Gentlemen, as you well know, there are 40-million workers in this country who are covered by over 30,000 defined–benefit pension plans, all of which are in jeopardy in the current legal/political scheme of things.  The recent pension legislation passed into law is not worth the paper it is written on, but was endorsed by the GOP rubber-stamp Congress for obvious reasons.  There are much broader issues and concerns here than just the McCook Metals and United Airlines ‘forced’ bankruptcies that resulted in the distress-termination of employee pensions and the gutting of labor contracts.  There is an overlying immoral stench that permeates throughout this entire travesty of justice and must be corrected.  You three distinguished gentlemen have the power to effect the necessary changes in legislation to help vaporize the stench.
Here is our heartfelt plea; kindly do not allow it to once again fall on deaf ears.  After a review of the enclosed correspondence and your subsequent staff investigation into these matters, and consultation with your distinguished colleagues in the Senate, would you kindly give just consideration to a full Congressional inquiry into these matters in the name of all that is good and honest in our government and representative of the pristine dream our forefathers envisioned before we began this death-spiral into our existing culture of corruption.
Your consideration of our plight is greatly appreciated by many honest and hard-working American citizens.  I will patiently await your response.
Very Respectfully,
Dan Hanley
cc:  Congresswoman Nancy Pelosi
Congressman Henry Waxman
Congressman George Miller
Congressman John Conyers
Congressman Jerry Costello 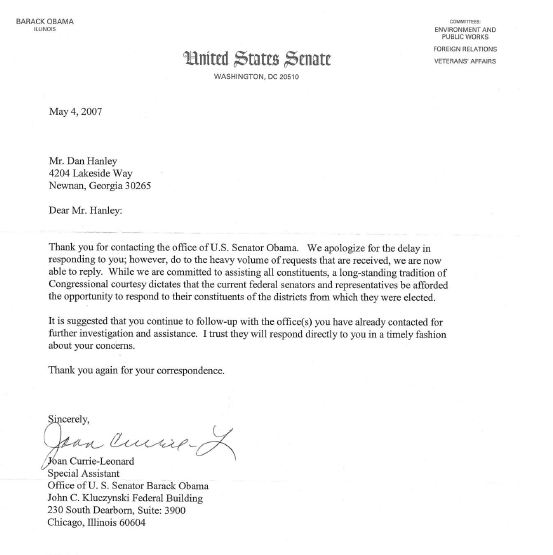 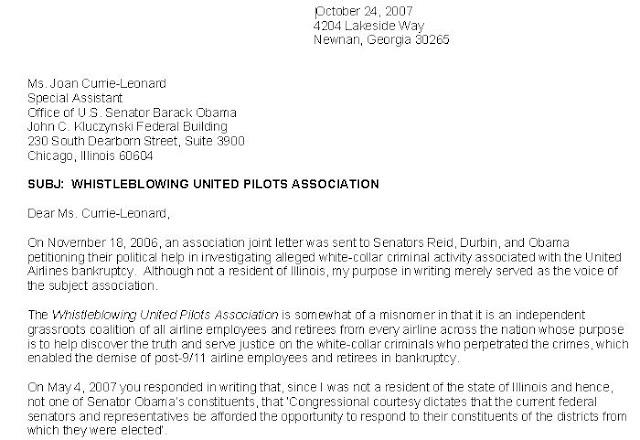 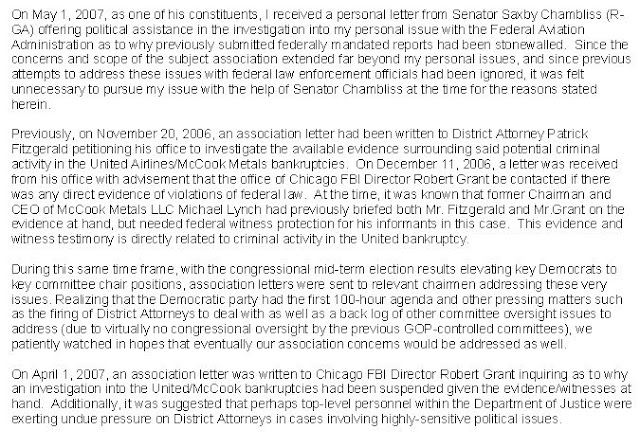 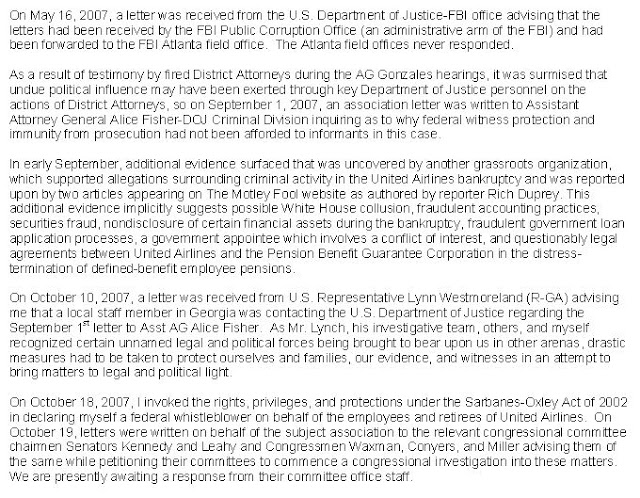 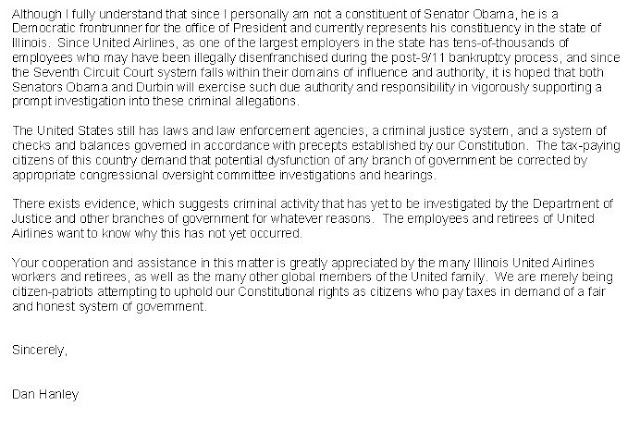 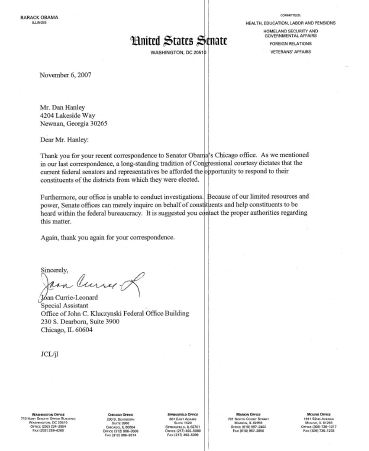 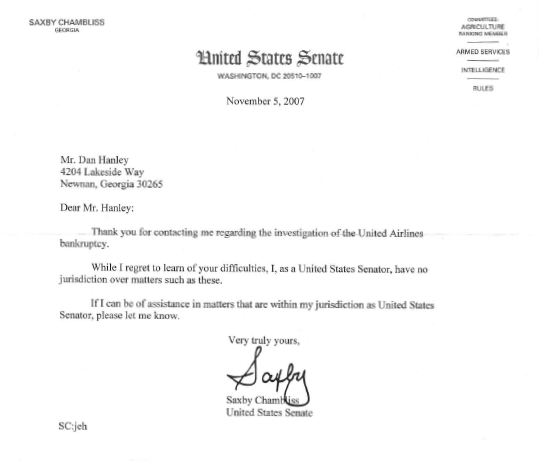 Posted by Captain Dan Hanley at 8:36 AM