Letter to Atlanta SEC and FBI! 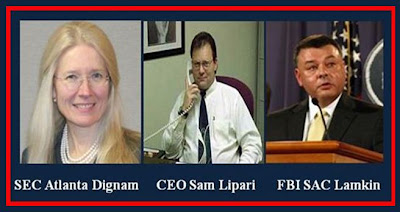 WHISTLEBLOWING AIRLINE EMPLOYEES ASSOCIATION
“Patriotism and Freedom of Speech in Action"
September 20, 2010
P.O. Box 3231
Peachtree City, Georgia 30269
Rhea Kemble Dignam, Regional Director
Securities and Exchange Commission
3475 Lenox Road, N.E., Suite 1000
Atlanta, GA 30326-1232
Brian D. Lamkin, Special Agent-in-Charge
Federal Bureau of Investigation
Department of Justice
2635 Century Parkway N.E., Suite 400
Atlanta, GA 30345
SUBJ:  ALLEGED JUDICIAL CORRUPTION RE UNITED AIRLINES BANKRUPTCY
Dear Ms. Dignam and Agent Lamkin,
I write to your good offices today on behalf of the members of the ‘Whistleblowing Airline Employees Association’ regarding information pertaining to alleged judicial corruption associated with the ongoing Securities and Exchange Commission investigation of United Airlines.
In November 2009, I received a letter from SEC Inspector General Kotz acknowledging the SEC under sight in not commencing an investigation into my Sarbanes-Oxley allegations submitted in a letter to the office of then SEC Commissioner Christopher Cox of October 2007.
In February 2010, I received a letter from Atlanta SEC Senior Enforcement Attorney Debbie Hampton advising me that this office had initiated an investigation into these allegations.
In April 2010, I phone contacted Ms. Hampton to discuss issues surrounding this investigation concerning federal corruption outside the jurisdiction of the SEC, in particular, the issues of alleged judicial corruption.  I advised Ms. Hampton that in February 2009, the Chicago office of the FBI had turned me away at the door when I attempted to present this same information and that I had subsequently written a letter to Attorney General Holder expressing concern.  I further stated to her that this letter had been deferred to Mr. Kenneth Kaiser, DOJ Assistant Director – Criminal Division, who directed me to contact the Atlanta office of the FBI.  Ms. Hampton assured me that SEC investigations were coordinated with all levels and branches of government and law enforcement, including the FBI.
On July 14, 2010, I received an email from Ms. Hampton advising me that this investigation would be coordinated by Mr. Matthew McNamara, Assistant Director of the Atlanta SEC office.
Several days later I phone contacted Mr. McNamara to discuss issues surrounding this case, but he also would not divulge any aspects of this investigation, nor would he confirm that the Atlanta FBI office was involved in this case.
On July 16, 2010 at 1:50 p.m. EDT, I called the Atlanta office of the Federal Bureau of Investigation and filed a federal complaint with the intake agent who would not provide me with his name.  Approximately one week later, I phoned the duty intake agent to confirm that the complaint was still on file, which he confirmed to me that it was, but would not advise me as to whether the FBI intended to open this case for investigation.
A few weeks later, one of the key informants in this case phone contacted the Atlanta FBI office to provide information, but the intake agent advised this informant to contact the Chicago FBI office whose agent had already informed me face-to-face in February 2009 that the Department of Justice had no intention of investigating this case without even reviewing the tiniest shred of evidence nor interrogating informants.
Because of the sensitivity of the issues involved that endangers the lives of informants, these witnesses are reluctant to come forth due to the three year stonewalling of these issues by DOJ and the repeated attempts by our association to draw the attention of relevant congressional committee oversight chairmen to this case.
Digressing momentarily, in July 2006, as you know our association was presented with information pertaining to the case of Michael W. Lynch regarding alleged judicial corruption associated with the United Airlines/McCook Metals, LLC bankruptcies.  In May 2006, a Qui Tam had been filed on behalf of Mr. Lynch under seal to Bradley J. Schlozman who was then acting as the interim U.S. Attorney for the Western District of Missouri.  Contained therein, the relator Michael W. Lynch provided evidence discovered in April 2006 that an alleged $39-million bribery fund was being used to secure outcomes in court cases including the shift of unfunded pension obligations of McCook Metals to the Pension Benefit Guarantee Corporation (PBGC) at the expense of U.S. taxpayers despite the obligation of Alcoa Aluminum financed by General Electric, pursuant to Alcoa’s acquisition of Reynolds Metals, under ERISA law.
A copy of the affidavit included as an exhibit in the filing of Mr. Lynch’s Qui Tam has been presented to your office.
United States ex rel Michael W. Lynch v Seyfarth Shaw et al. Case no. 06-0316-CV-W- SOW
The judges of the Western District of Missouri immediately dismissed this case.  After discussions with Mr. Lynch, DOJ filed a motion to reopen this case.  It has been alleged by unnamed parties that US Attorney Bradley Schlozman may have indeed circumvented main justice in consultations with Karl Rove and Attorney General Alberto Gonzales to permit US Attorney Bradley Schlozman to file a motion to dismiss this case, which is exactly what occurred in 2006.
Mr. Lynch is currently serving a sentence in Cook County jail in Chicago for criminal contempt in exercising his first amendment freedom of speech rights in a court of law in making similar allegations before Judge Paddy McNamara on October 13, 2006.  He serves as one of the key witnesses in this case and witness protection for him and others was letter requested of then SEC Commissioner Christopher Cox in 2007 for his involvement as a witness.
As you both are probably well aware, in March 2006, Mr. Schlozman was appointed interim U.S. Attorney replacing the ninth ‘fired’ District Attorney Todd Graves. In June 2007, while testifying before the Senate Judiciary Committee concerning DOJ hiring practices, Mr. Schlozman allegedly perjured himself in his testimony, but federal prosecutors declined to file charges of criminal perjury, which drew criticism from Senate Democrats.  Mr. Schlozman resigned from DOJ on August 17, 2007, and is currently employed at Hinkle Elkouri Law Firm in Wichita, Kansas.
Very recently, a federal racketeering lawsuit was filed with the Western District of Missouri that appears most relevant to and implicates the case of Mr. Lynch and the SEC/FBI investigation of United Airlines was presented to the ‘Whistleblowing Airline Employees Association’:

“288. The petitioner had knowledge of the evidence of Jeffery Immelt, General Electric, and GE Capital through the direction of the enterprise’s affairs by Seyfarth Shaw LLP causing the break in and illegal electronic surveillance in a suburb of Chicago, Illinois to unlawfully influence the outcome of federal and Illinois state court cases related to McCook Metals and its owner Michael W. Lynch an associate of the petitioner. The conduct was equivalent to the misconduct experienced by the petitioner.

289. The evidence of this conduct by the General Electric defendants had been delivered to Bradley J. Schlozman under seal in United States ex rel Michael W. Lynch v Seyfarth Shaw et al. Case no. 06-0316-CV-W- SOW who was then acting as the interim US Attorney for the Western District of Missouri.

290. The relator Michael W. Lynch provided evidence to Western District US Attorney Bradley J. Schlozman discovered in April 2006 that a $39,000,000.00 bribery fund was being used to secure outcomes in court cases including the shift of unfunded pension obligations of McCook Metals, Inc. to the Pension Benefit Guaranty Board (PBGC) at the expense of US taxpayers despite the obligation of Alcoa Aluminum financed by General Electric, pursuant to Alcoa’s acquisition of Reynolds Metals, under ERISA law.”

It is respectfully requested that the offices of the SEC and FBI review the information and evidence in the federal suits referenced below for inclusion in your investigation of the United Airlines bankruptcy: